The Cities With The Most Foul-Tempered Drivers

Almost every adult in the UK has either been on the receiving end of road rage, been guilty of having it, or seen it happen. It’s generally accepted that encountering a bad-tempered driver is part of modern life behind the wheel.

Road rage can include anything from an angry motorist giving the middle finger or shouting, right up to a physical fight in the street. It might be caused by people not paying enough attention to where they’re going, driving too slowly, being too close to the car in front, not giving thanks or pushing into traffic.

With 32 million motorists vying for space on British roads, it’s little surprise that things get heated. In fact, it’s claimed that more than half of the UK’s drivers admit to sometimes suffering from road rage whilst they’re driving.

Urban areas, being more congested, will obviously be the hotspots for people’s frayed tempers. But are some cities worse for it than others?

Which city has the angriest drivers?

We decided to find out by sending Freedom of Information requests to police forces in cities throughout England and Wales, asking how many instances of road rage happened there in 2021.

Of those that responded, the Welsh capital of Cardiff was revealed as the place where drivers vent their anger at others most, with 301 incidents logged by police there in 2021.

The city is closely followed by Leicester, where police reported 291 counts. Meanwhile, West Midlands Police revealed a figure of 240 instances for the cities of Birmingham, Coventry and Wolverhampton combined. Lancaster and Preston, had a combined figure of 191, and Leeds with 108 make up the rest of the top five. 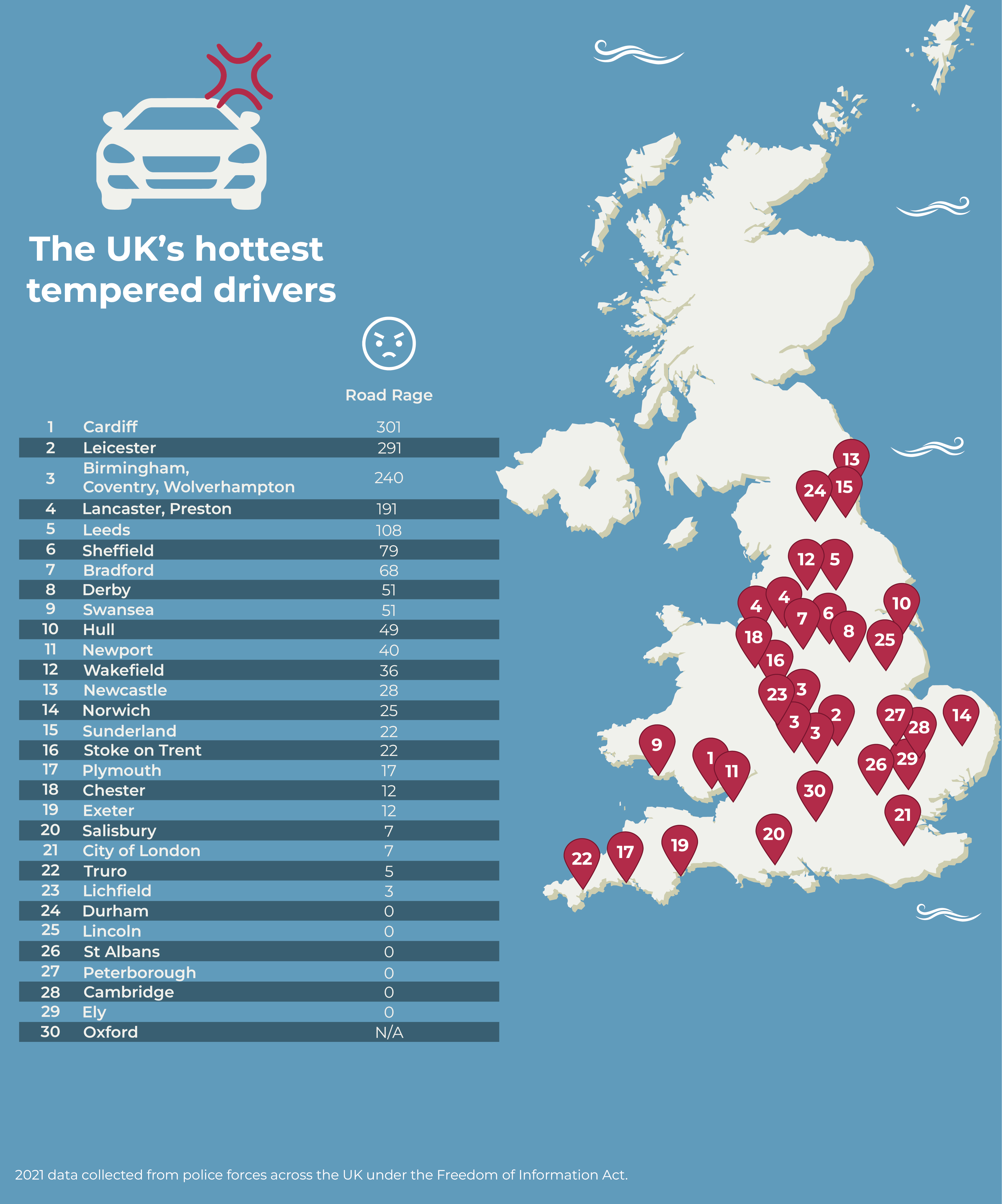 Top 10 cities with the most road rage incidents:

We also asked how many reports of dangerous and careless driving each of the cities’ forces had in 2021, to find out if angry drivers are found around the worst drivers. However, as the data shows little correlation, it seems hot-headedness isn't necessarily caused by high numbers of unsafe motorists.

Top five cities with the most dangerous driving incidents:

Top five cities with the most careless driving incidents:

Motorfinity CEO Daniel Briggs said: “These results show that some cities are clear hotspots when it comes to angry or impatient drivers.

“All of the top 10 are very busy urban areas, but it doesn’t necessarily follow that more motorists means more anger. Instead, the fact that the top few cities are so far ahead suggests that drivers may unknowingly copy each others’ bad behaviour.

“It’s never pleasant to be on the receiving end of road rage, but it’s also pretty unpleasant to be a regularly angry driver. Motoring should be an enjoyable experience, or at least one that people don’t dread.

“Given that road rage is generally considered commonplace, it’s likely that someone experiencing it has also been on the receiving end of another driver’s anger at some point. So it’s worth remembering that a car door probably doesn’t insulate your emotions as much as you first think.”

What to do if you’re the victim of road rage

If an angry driver confronts you in road rage circumstances, the most important thing to remember is to not retaliate. If possible, don’t make eye contact or react in any way, even if they were clearly in the wrong. You may only make things worse.

If it might be something you’ve done, don’t forget that we all make mistakes. It’s far better to simply learn from it and to move on. Saying sorry with a quick wave of your hand often works wonders in diffusing a situation.

What to do if you regularly have road rage

One of the most common causes of road rage is people being late and in a hurry to get to their destination. If that’s you, make sure to leave more time for your journeys.

You may have to regularly remind yourself that everybody makes occasional mistakes behind the wheel — including you. Realistically, shouting at someone is going to do very little to make things better. Particularly for something that has already happened.

By the same token, getting angry at another driver could turn the situation against you, if they become angry back. Better to tell yourself to calm down and let it go.

Data was collected via Freedom of Information Requests to every police force across the UK throughout 2021. As road rage is not a crime in itself, the police forces provided information where incidents were logged with the term ‘road rage’ included in the report.

Motorfinity go the extra mile to provide fantastic discounts on cars for frontline workers including NHS staff, police officers, military personnel and veterans, teachers, carers and more. Find out if you are eligible here.